We drive north from St Helen’s to the Mount William National Park, 14,000 hectares set aside to protect beautiful scenery and a wealth of interesting wildlife.  In particular we’re heading for the Forester Kangaroo Drive, so you can guess what we’re hoping to see.  Our hopes rise when we spot this this sign all over the place as we enter the Park.

Having said that, similar signs normally depicting wallabies, but sometimes wombats, Devils or even echidnas, are everywhere in Tassie.  This reflects the fact that conflicts between wildlife and motor vehicles are commonplace, and driving in some areas you come across roadkill literally every few metres.  The sad thing about Tasmanian wildlife is that it’s often not alive at all by the time we get to see it.  Partly this is because most of the critters are nocturnal and therefore difficult to spot on the road, but it’s also a result of what one might best describe as the cavalier night-time driving habits of many Tasmanians.

Thankfully the Kangaroo Drive lives up to its billing and we’re pleased to get views of several individuals, though none of them particularly close:

It’s also good to re-acquaint ourselves with some old friends: this King of Cubes is out and about, foraging happily and apparently unaware that he’s supposed to be nocturnal:

We’re also pleased to see this echidna giving the local ants and grubs a hard time:

But Mount William National Park also gives us a chance to make some new friends, including this Banded Plover:

We stop to eat lunch at the Stumpys Bay campground and quickly find ourselves surrounded by dragonflies:

As we leave after just a few hours we reflect on a what has been a great visit.  The area of the National Park covered by the Kangaroo Drive is all but deserted – we saw was one other visitor car and a couple of workmen in the campground – but was teeming with wildlife.  Most definitely it’s our sort of place.

In an earlier post mentioned that echidnas are awkward little sods that will go out of their way to avoid being photographed. It was therefore all the more surprising that today, while driving through Gowrie Park on the way to Railton and Sheffield we encountered one that was not only happy to have his picture taken …

… but also had a strange desire to stick his enormous snout up my trouser leg:

Normally I’d be flattered that any wild animal trusted me sufficiently to approach in this way, but given that echidnas are notorious for the size of their fleas this was probably a mixed blessing.

A regular feature of our early days of driving through Tassie has been the fruitless pursuit of a decent photograph of an echidna. The normal sequence of events is as follows:

But today our luck has changed. We spot the echidna from some distance off and I’m able to pull off the road and on to a soft grass verge long before we reach him.  Julie grabs her camera and stealthily circles around the critter to approach him from the rear and downwind.  Meanwhile the echidna is distracted by a rotten branch, which he is alternately ripping apart with his powerful front limbs and probing with his long pointy snout in search of the southern hemisphere’s tastiest ants.

We stand watching him for maybe 15 minutes while Julie takes snap and snap. At last, after days of effort she takes her first decent echidna photograph.

Bonorong Wildlife Sanctuary is a key player in the ongoing effort to maintain a viable captive population of Tasmanan Devils that can be released back into the wild as and when the threat from the highly contagious Devil Facial Tumour Disease has been contained. In the wild Devils are strictly nocturnal, but the keeper tempted this one out of his den with the offer of a dead chick.  It was wolfed down ravenously.

Bonorong looks after sick and injured animals from all over Tasmania with a view to ultimately releasing them back into the wild once they have recovered. We were pleased to meet this young wombat, who is an orphan.  She is recovering well, and is due to be released in about a year from now.

Bonorong also has some koalas on site. Koalas are not native to Tasmania, but Bonorong was asked to take on some from Kangaroo Island in South Australia.  These had to be removed to help manage an overpopulation problem amongst the koalas there.  This guy is called Bert, and he is very cute and very, very sleepy … koalas have to sleep for about 20 hours a day so that their systems can cope with the toxins in the eucalyptus leaves that are their staple diet.

We hadn’t realised before that koalas are closely related to wombats, and when you study that them closely the similarities are obvious. However one lives in trees and the other on the ground.  Also, the koala is as thick as two short planks (a brain about the size of a walnut, apparently) whereas the wombat, which is regarded as the mastermind of the marsupial world, is only as thick as one short plank.  Both, however, are as cute as hell, and who needs brains anyway when you can make friends and influence people just by being unbelievably cuddly?

There are also a number of Eastern Grey Kangaroos bounding around the grounds at Bonorong. However it was hot today, and for some of them bounding was just too much bother.

To the untrained British eye the echidna looks like a hedgehog that spends every evening at the gym and all its pocket money on steroids.  However there’s far more to it than that, and like many of the other critters on our Mammals Hit List it is seriously weird.  Here’s what you need to know … 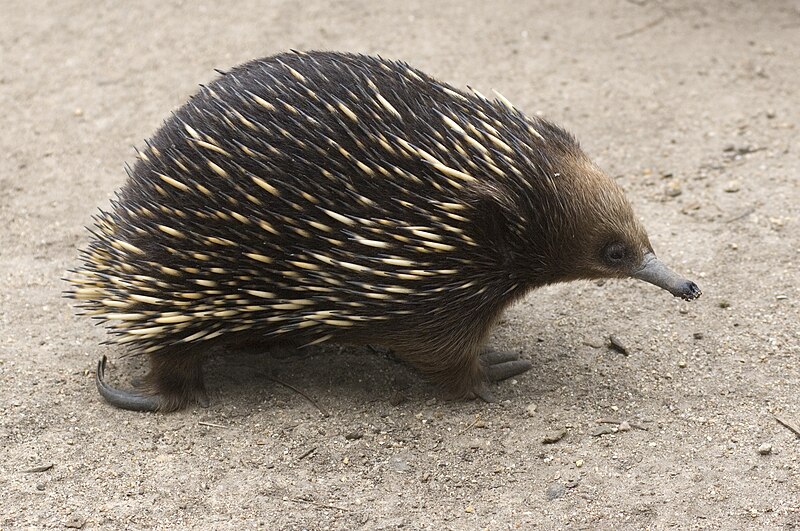 An echidna’s spines, which reach 50 mm in length, are in fact modified hairs.  Fur can still be found between the spines; this provides insulation, and is longer and thicker in the Tasmanian subspecies, reflecting the colder temperatures on the Apple Isle. Tasmanian echidnas are also bigger than their mainland counterparts.

Unsurprisingly for a critter that’s also known as the spiny anteater, the echidna dines out on ants and termites, but won’t turn up its snout at grubs, larvae and worms either.  That snout is specially adapted, and can sense electrical signals from insect bodies.  On detecting prey, the echidna uses its long, sharp claws and short, strong legs to dig into the soil and expose the invertebrates.  It then licks them up with its tongue, which is 15cm long and covered with sticky mucous.  The echidna’s Latin name is Tachyglossus; it means fast-tongue, which is plainly well deserved.

The echidna’s main claim to fame is that, along with platypus it is an egg-laying mammal, or monotreme.  However, the egg isn’t laid in a nest.  Rather, it’s laid directly into a pouch on the female’s body, where it hatches after 10 days.  The young echidna, or puggle, spends most of its first two or three months in the pouch, by which time the growing spines are causing such discomfort that the female evicts the youngster for good.

This brilliant piece of film from National Geographic shows the echidna’s egg, and later a tiny pink puggle.  Amazing!  Another notable feature of echidnas is that unlike “normal” mammals they have no nipples, but instead the mother feeds the puggle with milk that simply oozes through patches in her skin.

The mating behaviour of echidnas is also bizarre, with “trains” of up to ten randy males pursuing a female in season for hours on end.  The males don’t fight, they simply follow, until the female finally succumbs and allows one of them to have his wicked way with her, using his remarkable – and I’m not joking here – his truly remarkable four-headed penis.  Did I mention that echidnas are weird?

The “echidna train” behaviour is not fully understood and is rarely witnessed, but was filmed a few months ago in Sydney’s Taronga Zoo.  Breeding echidnas in zoos is difficult, so Taronga must be doing something right.  The good news is that echidnas are common, and are said to be the most widespread native animal throughout Australia.  Let’s hope we see one on our travels.