First half: Ah, but your land is beautiful

The island setting, the wide-open spaces, the tranquillity and to some extent the landscape are reminiscent of our favourite place in the whole world, Orkney.  We feel strangely at home and at peace here, this tiny island lying all but unknown between the Australian mainland and Tasmania:

A man could be happy here, an island where motorists greet one another with a friendly wave as their cars pass, as long as he doesn’t crave the bright lights of the city, the hustle and bustle of 21st century living:

Like Orkney, nowhere on Flinders is far from the sea, and nowhere is more beautiful than the coastline.  This, for example, is Allport Beach:

Killiecrankie Bay gives its name to the Killiecrankie ‘Diamond’, which in reality is a type of topaz.  The ‘diamonds’ are much sought after and although we don’t find any (we don’t have the time or the energy to look), later in the trip we encounter a guy who has a pocketful thanks to his fossicking endeavours.  Ourselves, we’re happy just to see the magnificent bay:

Once again, parts of the rocky coastline are coated with red and orange lichen, adding an exotic twist to the landscape.  Julie takes this photo at North East River:

Some of the places we visit are simply stunning.  This is the white, sandy beach of Palana Bay, with the Sisters Islands in the distance:

Sawyers Beach is equally beautiful, though here our enjoyment is cut short by swarms of biting flies that send us scurrying back to the safety of the car: 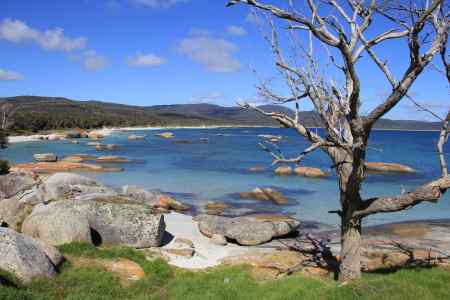 In 1834 one hundred and thirty-five Tasmanian Aboriginals from the mainland were settled on Flinders Island, where as George Augustus Robinson said they were to be ‘civilised and christianised’.  The settlement was called Wybalenna which means ‘black man’s houses’.  They were forbidden to practise the old ways and were homesick for their lost country.  Many died of respiratory disease, poor food and despair.  In October 1847 the forty seven survivors of this group were transferred to Oyster Cove, near Hobart.

We visit Wybalenna.  All that remains is a restored chapel and a graveyard containing unmarked aboriginal graves along with graves of some of the first European settlers.  In the nearby cemetery, the Young Farmers’ club has erected a plaque to commemorate the death of over 100 Aborigines at Wybalenna: 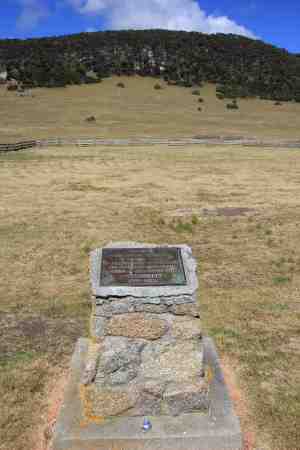 Wybalenna is a sobering place.  Throughout our month in Tassie I’ve struggled to make up my mind about the official attitude to the Aboriginals who once called this place home.  Superficially everything is respectful, even a little contrite, honouring a lost race and culture that died at the hands of the White Man.  But I’ve been around the block a few times, I know that you would say this anyway even if you didn’t feel it, the marketing men would want you to clean up your image through a show of political correctness.

I simply don’t know what I think about the Aboriginal issue, but I do know how I feel as I look at the field of unmarked graves and reflect on the fate of the innocent people buried here: I feel sad, so so sad.  Let’s move on.

Second half: A road less travelled

Overnight, the weather breaks.  Greeted by leaden skies, low cloud and rain, we rearrange our itinerary, opting to take a dead-end gravel road to Lackrana Wildlife Sanctuary where, hopefully, we can birdwatch from the car.

We birdwatch our way down the road, deeper into the sanctuary.  In two hours or more we see just one car.  We reach the end of the road and decide to call it a day.  We’ve seen little of interest, the weather is foul and the visibility rotten so we’ll head into Whitemark, the biggest settlement on the island, for a hot drink and something to eat.  I turn the car round and begin the journey back towards town.

After a few hundred metres Julie tells me to stop.  There’s a flock of Yellow-tailed Black Cockatoos working their way through the trees to the left.  This has been a bogey bird for us, and now seems like a good opportunity to get a decent photo, particularly as the rain has eased.  I pull off the road and Julie stalks them for about twenty minutes.  She gets views of the flock in flight, but not the shot she was hoping for:

Damp and disappointed Julie gets back in the car, and I prepare to set off.  I turn the key.  Nothing.  I turn it again.  Still nothing.  I take it out, re-insert it, and try again.  Absolutely nothing.  The electrics have failed completely.

This is, to say the least, a bit of a problem.  We are many kilometres up a dead-end gravel road along which no car has passed for a couple of hours.  Nobody lives out here, so we’re on our own.  Also, we have no food and very little drink with us as we weren’t expecting to do anything more adventurous than some casual birding from the car.  We try our UK mobile phone, but inevitably there’s no reception.  And, to add insult to injury, the heavens have opened again.

We have two choices: to stay put and hope that a mad birder will brave the deluge to visit the Lackrana Sanctuary, or to attempt to walk out along the gravel road in the pouring rain until we reach a busier road where maybe, just maybe, there’ll be a vehicle we can flag down.  Reluctantly, we decide to walk out.

The rain teems down and a cold wind gets up.  Our backs, our legs, our feet all protest painfully, and we’re running out of drink. We understand the term walking on water. The road is alive with froglets celebrating the arrival of wet weather, but we’re too miserable to share their enthusiasm.  At one point a Yellow-tailed Black Cockatoo lands in a tree just yards from the road, and appears to laugh as we squelch past.

After several hours and over 7km we at last spot a car approaching us and flag it down.  Never in my life have I been so pleased to see a Volkswagen.  I’m close to tears, the relief is so profound.  The occupants are shocked to encounter us, but come willingly to our rescue.  One of them has a working mobile phone.  We call Rob, and within 40 minutes he’s with us.  He scratches his head, curses under his breath and twiddles under the bonnet, and eventually gets us going.  We limp back to the farm with Rob following close behind, just in case.

Rob is mortified.  “Nothing like this ever happened before,” he says miserably.

In reply I mumble polite disclaimers.  “No worries,” I say, “nobody died.”

The delicate dance continues for a while, soothing declarations are exchanged, reassurances offered.  In due course a bottle of Scotch changes hands, is accepted in the spirit in which it is gifted, and honour is duly satisfied on both sides.

Everything we’ve worn or carried today is sopping wet and needs to be dried out before tomorrow morning’s flight to Melbourne.  Lorraine lights the log stove in our cabin and lends us a clothes horse, and we get started on the job in hand:

The only way we can get the insides of our shoes dry is with the hair dryer, and I’m forced to dry out my leather wallet and the British £10 notes it contains on a heated towel rail.

As we reflect on the day’s events we recognise things could have turned out a lot worse.  There are definitely some lessons for us to learn, should we ever be crazy enough to contemplate a trip like this again:

To be brutally honest, today’s experience has taken the edge off our visit to Flinders and, to some extent, off our Tasmanian adventure as a whole.  It was scary, very scary, I don’t think we’ve ever felt so totally alone as we did on that gravel road, a road less travelled than any we’ve been on since we arrived in Tassie.  On top of that, we’re not particularly fit and once the adrenaline begins to wear off the pain really kicks in, and there isn’t any part of us that doesn’t hurt like hell.

But let’s look on the bright side: we’re still in one piece (just) and tomorrow’s another day.  At least in Melbourne we can be confident that our car won’t break down … we’ll be travelling by hop-on-hop-off bus instead.