Several years ago we visited Roswell, New Mexico, close to the infamous Area 51. Images of aliens and models of aliens are everywhere in Roswell and the visitor is left in no doubt that this is the alien capital of the planet.  However real live aliens are much harder to find. 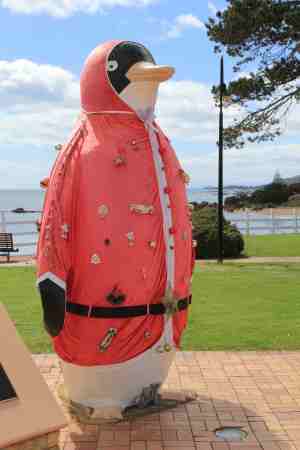 This syndrome is also evident in the coastal town of Penguin, Tasmania. It is named in honour of the Little Penguin which comes ashore to lay eggs and rear young in various spots around Tassie.  Penguins are the town’s emblem, and images or models can be found all over the place: on the side of the rubbish bins attached to lampposts, at both ends of the seesaw in the kids’ playground, outside the visitor information centre, on posters and billboards, and so on.

The most famous example is the massive model penguin on the esplanade, well over two metres tall by my reckoning. It’s a notable local landmark, and while we are parked nearby a constant stream of people turned up to be photographed next to it.  We are a little disappointed to see it’s been desecrated with a Santa suit, but after all it’s late November so I guess we shouldn’t be surprised.

Of course, the one penguin-related item that’s hard to find in Penguin is a genuine pukka penguin. Not so in Stanley, the coastal town we’re heading to in western Tasmania.  The road signs in Stanley make it abundantly clear we’re in penguin country:

We’ve done our research and know just where to go. A cool wind blows off the sea as we wait in a car park next to Stanley’s beach, which adjoins a small nature reserve where some of the penguins have their burrows.  We check out the nature reserve, but nothing doing.  The light is fading fast, the wind is getting colder and so are we.  A few other hardy souls join us, but despite our torch with the penguin-friendly red light we see nothing.

A question arises: is this a wild penguin chase or simply a wild goose chase? We give ourselves a deadline: 9.30 then we’re out of here.  We go back to the nature reserve.  Mrs P shines her torch under a bush and we see two penguins, barely visible in the gloom.  Success!  Then she shines her torch in the other direction, towards the beach and in the eerie red glow we can just make out a couple white waistcoated figures as they pick their way over the rocks and towards the car park.

We take our positions and the penguins approach. They hesitate behind a white picket fence, just a few feet from where we’re standing.  They must know we’re here, but the instinct to return to the burrow is too strong.  The leader plucks up courage and he’s off, almost running over our feet as he crosses the car park and climbing the grassy bank at its rear boundary.  The light from Mrs P’s torch is feeble, and soon he’s swallowed up by the darkness.  We look back to the picket fence and two other penguins are on the move now, waddling with comic determination like David Suchet playing Agatha Christie’s Poirot.  Soon they too are lost to sight, heading away from the beach.

In all we watch about six or seven penguins start the epic journey they must make daily in the breeding season. It’s been far too dark to take photos but no matter, we have an indelible memory of birds doing what their ancestors have done since the dawn of the species.  It’s humbling to witness this tiny fragment of nature at work.

We return to our car to drive off, but as we pull out of the car park the headlights pick up penguins in the middle of the road.  Having traversed the car park and climbed the bank at its rear they are crossing the road to people’s front gardens where presumably they have their burrows.

We stop in the middle of the road and wait until they’ve crossed safely, then edge uphill towards our accommodation on the outskirts of Stanley. As we do so, pademelons are visible on either side of the road and sometimes in the middle of it, playing chicken as we approach.  They bounce out the way when the car is nearly upon them, turning to watch thoughtfully as we pass.  Perhaps they are wondering what business we have to be out after dark, which is rightfully their time, their domain.

A couple of hundred metres from the car park I round a bend to find more penguins crossing the road, working their way uphill. We watch spellbound until they’ve disappeared under roadside vegetation, and continue our journey.

Within minutes we are indoors, out of the cold and the darkness, home comforts duly restored. But as we drink our tea we talk and talk about the penguins and the pademelons, for whom the night is still young.