A few months into my third year at junior school an Australian girl joined our class.  Her name was Dawn Culshaw, but pretty soon we’d christened her Kangaroo Culshaw.  Partly this was because we loved the alliterative rat-a-tat-tat of the words, but mostly for the simple reason that we were in awe of her origins.  For working class kids growing up in West London in the 1960s Australia was impossibly remote and exotic, and nothing symbolised this antipodean other-worldliness more than kangaroos. 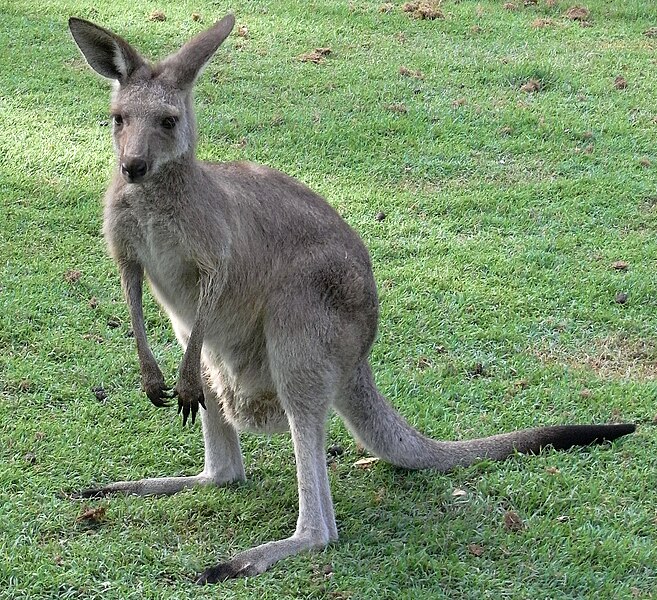 The kangaroo belongs to the macropod family of marsupials, or to put it another way they have big feet and carry their young around in pouches.  There are around 60 species of macropod still living, mostly in Australia although a couple are hanging on in New Guinea.  Very few of them, however, are true kangaroos: also included amongst macropods are tree-kangaroos, pademelons and wallabies.  Although here are no tree-kangaroos in Tassie, the Apple Isle boasts three types of macropod: Eastern Grey (or Forester) Kangaroo, Bennett’s (or Red-necked) Wallaby, and Tasmanian Pademelons (Rufous Wallaby).  We hope to see them all.

As the variant name of the Tasmanian Pademelon implies, pademelons and wallabies are very similar, but what’s the difference between kangaroos and wallabies?  Put very simply and somewhat crudely (well that’s what Julie reckons anyway) the wallaby is in essence a short-arsed kangaroo.  The largest kangaroo – the Red, which is not found in Tassie – measures up to 9 feet from head to tip of tail, compared with 6 feet for the largest wallabies.  Most wallabies, however, live up to their short-arse billing, coming in at around 2 feet long.

The lower legs of kangaroos are disproportionately large, making them look long and rangy.  Wallabies have shorter, more compact legs and look better proportioned.  They also tend to have bright coats sporting splashes of different hues, unlike their duller and more monochrome cousins.  Generally speaking kangaroos are animals of open, treeless areas, and so grasses are their staple diet.  On the other hand, wallabies tend to frequent forested or wooded areas and as a result tend to eat leaves.

In Tasmania the Forester Kangaroo suffered greatly from hunting in the nineteenth century, and from disease and loss of habitat to agriculture.  It’s now fully protected throughout the island, and we have high hopes of seeing them in the  Mount William National Park, which was originally proclaimed to protect the last of Tasmania’s wild Forester Kangaroos.  They are reported to be common in the park, and easily spotted from the aptly named Forester Kangaroo Drive.  If we don’t strike lucky there we have another chance to see them at Narawntapu National Park, which has somewhat fancifully been referred to as the Serengeti of Tasmania.  Interestingly Narawantapu was previously known as the Asbestos Range National Park … a marketing man’s worst nightmare, no wonder that in 1999, in pursuit of the tourist dollar, they adopted the Aboriginal name for the area.

The kangaroo is, in my view, one of five great Australian icons, the others being the koala, Uluru (Ayers Rock), Sydney Opera House and the incomparable Shane Warne.  The kangaroo is, however, the only one of these icons to have been the subject of a poem by D H Lawrence.  The author and poet spent a three months in Australia in 1922, during which time he wrote the novel Kangaroo, which isn’t about kangaroos at all.  However we can forgive him that indiscretion for penning this excellent poem, also entitled Kangaroo, which for me captures something of the soul of this enigmatic Australian icon.  Read and enjoy.